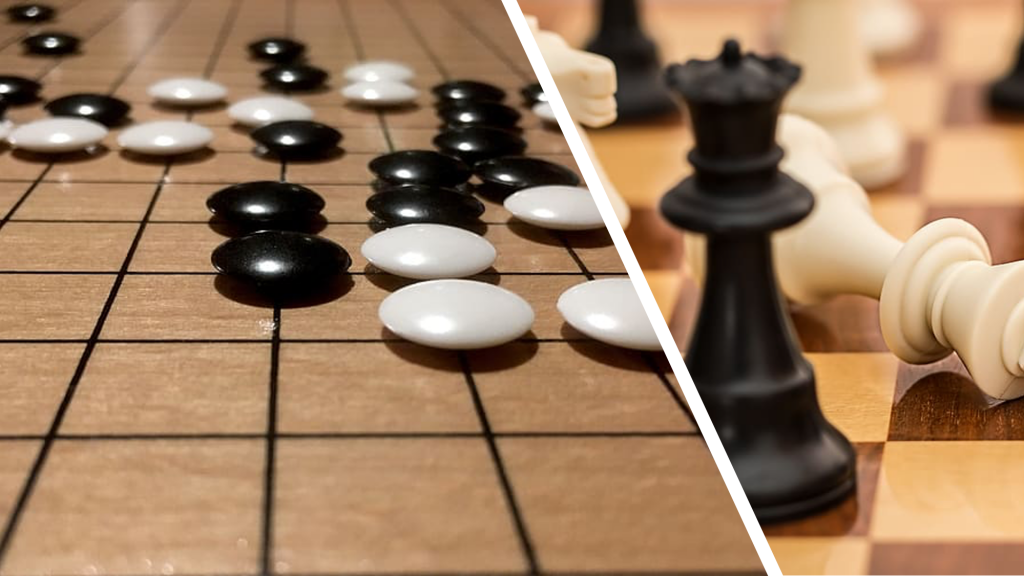 Last week, Fabrice Rosenstiehl took us through an overall comparison between a Go player's and a Chess player's mindset. This week, we explore four major differences between both games, that lead to radically different decision-making and leadership styles.

Cécile: What other differences can you see between a Chess and a Go player?

Fabrice: Chess is a winner-takes-all game; Go is a world-division game.

At the end of a Chess game, the defeated king is overthrown on the board or gives up the fight when death becomes inevitable. In a game of Go, ½ point of territory is enough to win, which means the loser doesn’t lose face: most of the time, s.he ends up with almost 50% of the final benefit.

In a political power game, a Go player will try to distribute the power to their advantage, whereas a Chess player will aim at eliminating their opponent. In a merger at the beginning of my career, I remember trying to share the power of my position with my counterpart in the organisation my company had just acquired. I started sharing information and responsibilities with him. To my surprise, none of these opening moves were ever returned. Eventually, I realised I had no choice but to make it a “him or me” fight. Too late though… I learnt the hard way that I can’t share power or anything else with someone whose only goal is to kill me, even if I start stronger.

Players of different levels can play a game of Go with equal chances to win; that can't happen at Chess.

The handicap system gives the weaker player a starting advantage in the form of strategically placed stones or extra points. It allows players of different levels to play with equal chances to win. It is a powerful way to learn with stronger players, without being trashed every time. I remember losing by only a few points to professional Go players, which would never have been possible at Chess. The point of the stronger player is to educate, not to demonstrate their strength.

In a business environment, I give more time, guidance, patience to junior professionals than I give to seniors, which brings us back to Situational Leadership. In a wider perspective, I like this principle of Japanese business that adapts payment terms to the size of the supplier: the smaller the supplier, the shorter the payment terms and vice versa.

In Chess, a low-rank piece can be sacrificed for the sake of a high-rank piece. In Go, the stones don’t have an individual value: their value lies in the efficiency of their mutual connections. If a Chess and a Go player share the same commitment to win, the Chess player wins alone, whereas the Go player wins collectively. As a leader, I need everybody in my team to have that same winning spirit and to contribute to success. I believe that in the end, my clients’ experience relies as much on the Unique Selling Proposition of my company’s products as on the way they are treated by my field salespeople or remote customer service. One missing link and I may lose my business to a more diligent competitor or miss the profitability targets my shareholders are expecting my business to reach.

I have noticed that this mindset sits better with Japanese or American corporate cultures: I have often felt that a leader’s attention to humble contributions was considered irrelevant in European corporations, where managing up largely prevails over managing down and across.

In a Chess game, a tactical error is fatal. Therefore, a Chess player will invest all their resources to anticipate and counter their opponents’ moves. The timescale of a Go game is so long, that making mistakes is inevitable. “Aji” is a wonderful concept of Go: seemingly lost stones on the board keep an “aftertaste” that can become instrumental again as the situation moves forward.

In business, a bad move can be a poor investment, a dropped innovation, a failed deal. A short-term player will kill them fast, for the sake of highly visible quick wins. A Go player will be patient and see how the situation evolves before making a final decision. Therefore, reacting to the competitor’s last move is not necessarily the best thing to do. Sometimes, the best move is to not react locally and play elsewhere. Unfortunately, the current fashion for quick wins does not advocate for this kind of patience.

Are you saying that a Chess player will be more successful doing business in Europe than a Go player?

I have experienced that to be true in the short term. When facing a Chess player, one can only freeze, flight or fight. But more and more corporations strive for sustainable profit: to that end, they know that they need engaged and aligned teams, long-term thinking, sharp execution and rigorous continuous improvement. Sharp execution is not good enough anymore. Business will always need Chess players, and more and more Go players.